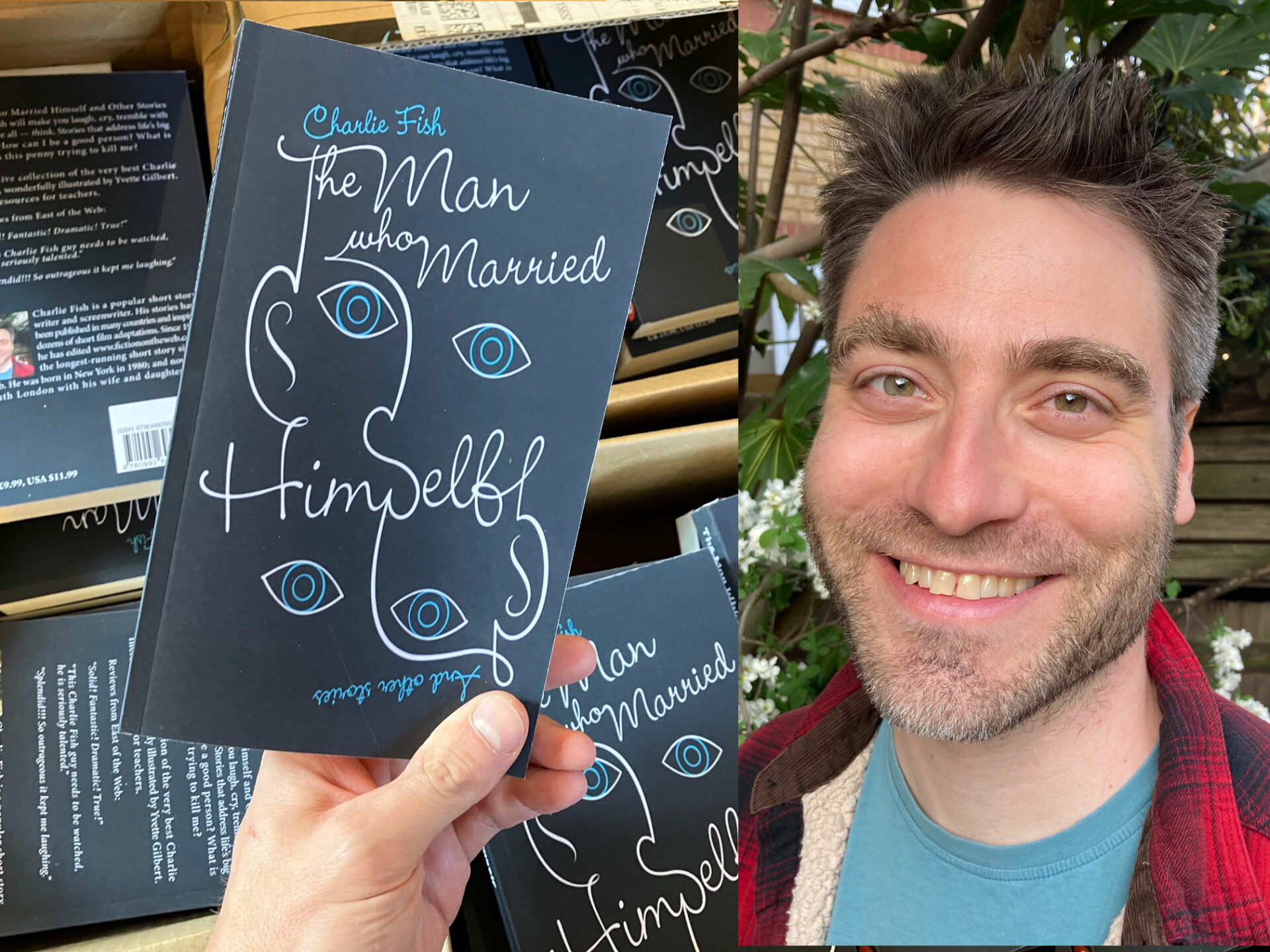 A conversation with Charlie Fish about his collection of short stories, “The Man Who Got Married”. First part

In 2018, Charlie Fish published my short story, “‘My Love Ana’—Tommy” in Fiction on the Web. Charlie, originally from New York, has been posting stories online since 1996 and now lives in London. In addition to publishing and editing for other authors, Charlie has written several short stories, which have appeared in various magazines, and some have been adapted into films.

I have just received his first collection of short stories from England, “The Man Who Got Married”, together with a personal note which I have on my desk. The book contains seventeen short stories each illustrated by Yvette Gilbert and accompanied by a short essay, which I found quite unique. Charlie, a man who dared to publish fiction on the web in 1996, is a pioneer and his spirit is also reflected in this book. The collection is not only interesting from a content point of view but also from the way it was released, through a Kickstarter campaign.

Well, I wanted to talk to Charlie about all of this and find out more about his self-driving spirit. I guess in the future he will publish his memoir, “The Man Who Dared to Publish Fiction on the Web in 1996”.

Charlie, thank you for granting this interview.

JS: First of all, I think we want to hear about your personal story, your projects and how you ended up in England writing fiction.

CF: Jhon, I’m really proud to have published your wonderful story on Fiction on the Web – it’s the best kind of speculative fiction, which reprograms my brain to see the world differently. Since childhood, I have been fascinated by these kinds of stories, science fiction and magical realism, in which an impossible metaphor thrills you with a sense of wonder and somehow helps you see more clearly the real world. I grew up wanting to be part of it.

I was born in New York to a British father and a Greek mother, and spent my childhood moving back and forth across the Atlantic until I finally settled in the UK. This nomadic lifestyle meant that my most loyal friends were books. I read voraciously and wrote whenever I could hold a pen.

When I was a teenager in the 1990s, the World Wide Web was making the Internet more accessible, and I saw an opportunity to create a platform for budding news writers like me. At the time, there were very few places that published fiction online, and we all supported each other. I got so much joy from the community that I kept going, long after all the other fictional websites had shut down and hundreds more had taken their place.

The thing I’m most proud of Fiction on the Web is that every story I publish receives feedback from readers. These comments are valuable to the authors; they are the lifeblood of the website – as long as people keep commenting, I will keep posting.

Meanwhile, between publishing and my family and my day job and my twin obsessions with movies and board games, I sometimes find time to write! Short stories remain my passion, but I have also written films, and documentaries like The History of Video Games published last year by White Owl.

JS: Tell us how you got here with the idea of ​​publishing your collection of short stories and why you chose a Kickstarter campaign to do so. What did you learn from the experience?

CF: I’ve been writing short stories for over 25 years. Many of my stories have been published, and I’m lucky that some have reached a wide audience. I often get emails from all over the world – from film students asking to adapt one of my stories, or teachers using a story in the classroom, or linguists wanting to translate a story. These kinds of comments help me identify the stories that resonated with readers the most. I wanted to collect these great hits from the past 25 years to serve as a kind of business card, so that if someone asks me about my writing, I can give them a copy of the book and say, “This is me.

Publishing the collection via Kickstarter allowed me to ignore commercial considerations and create exactly the book I wanted to make. Not only is the content uncompromising, but also copyright free. Publishing the collection as a “Free Cultural Work” under a Creative Commons license is something that traditional publishing would never have allowed. I’m not interested in making money from my stories, I’m interested in inspiring, sharing, giving. I get huge satisfaction when people respond and adapt my stories – by posting without copyright, I let people know they have my blessing.

JS: I was fascinated by the short essays after each story. Sometimes more than knowing the end of the story, as a writer I wanted to know how or why you wrote the story. While reading, I was eager to get to the essay. I have never seen anything like it. Tell us about these trials and why you decided to include them.

CF: I’m glad you found them interesting! Many stories from the book are already available to read elsewhere, so I wondered what else I could include, to add value to readers. I added illustrations, notes for teachers and these little explanations of the story behind the story.

Much of literature and the arts is a matter of context. Our experience of a piece can be enormously enriched by understanding how and why it was created. My stories are all very personal, and the opportunity to explain why they mean so much to me allows the book to represent me not just as a writer but as a person.

JS: In general, I thought all the stories had a common theme which was ‘relationships’ and that’s why the title of the book is ‘The Man Who Got Married’. Did you intend to have a theme? Is there a story that didn’t make the final cut and if so, why did you exclude it?

CF: I read widely, especially because I read constantly Fiction on the Web submissions – and that diversity is reflected in what I write. I often experiment with different perspectives and genres. But there are themes I keep coming back to. Relationships, yes, but also freedom; meaning; how to be a good person. However, the stories I have selected for this collection are a sort of “greatest hits” compilation rather than necessarily fitting under a unifying theme.

There are some of my published stories that I didn’t include because I didn’t have enough to say about them in the post-story blurb; for example, I almost included “Annabel”, a horror story about a cannibalistic relationship based on a comic poem I wrote in my teens. The journal in which this was published sadly disappeared after just one issue. I may try to get it published again elsewhere, but in the meantime it will gather dust on my hard drive.

JS: “Baggio” is one of my favorite stories and I can see why it was made into a movie. I think the story speaks to us writers who sometimes just want to write and have no other commitment, don’t you think? Tell us more about the story.

CF: Thank you for your kind words! A friend of mine used to bring a badger puppet called Baggio to parties, and he imbued the puppet with a hilarious, cocky personality. I was inspired to write Baggio’s backstory, explaining why such a colorful individual surrendered his free will to our humble friend – to the extent that our friend literally turned him into a puppet.

At the time, I was exploring the idea that having absolute freedom can cause us to be overwhelmed by our choices and paralyze us. We get distracted by the thousands of options available to us and end up focusing on nothing. If only a benevolent master would tell us, “This is your way of life. This is what you must do, to the exclusion of everything else. So, maybe we could turn off YouTube and Snapchat and Tinder and Bridgerton — and finally fulfill our destiny. Of course, as Baggio finds out, it’s not that simple.

After “The Story of Baggio” was published, it was adapted into a movie starring Jean Reno, and it’s a constant source of amusement to me that so many people have enjoyed this story without knowing the joke: c secretly is a story about my friend’s badger puppet.

Part II of the interview will be published in the coming days. Please stay tuned.

charlie fish is a popular novelist and screenwriter. His short stories have been published in several countries and have inspired dozens of short film adaptations. Since 1996, he has edited Fiction on the Web, the oldest news site on the web. He was born in Mount Kisco, New York in 1980; and now lives in South London with his wife and daughters.

How to check (URL must contain manabadi and bse telangana)