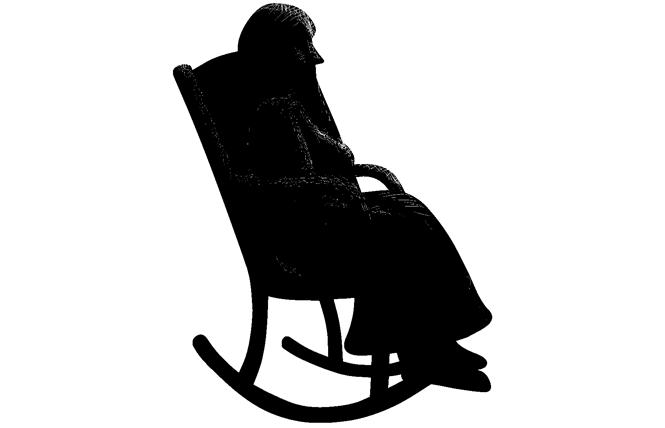 As I sit down to write this column, I imagine myself in a rocking chair on the porch, like I’m about to share stories about the hardships we faced during the Great Depression in the old days. close or something like that. See, I was thinking the other day about what the trans community is now, compared to what it was when I first found it, and the change that made.

However, you won’t find me threatening to light the garden hose on anyone, lest they avoid my lawn. No, while times were different then and I had some challenges that I will cover below, I am not going to proclaim how easy it is for trans kids these days. How can I even envision that, at a time when the far right has all but declared the season open to transgender people, and we are seeing a record number of anti-transgender murders?

The big difference is that I feel like our community was smaller then. I don’t mean by numbers, however, yes, I suspect a lot less of us realized and nurtured our trans selves back then. No, I mean a township is smaller than a big city, where everything was much more quaint and provincial decades ago.

As I have discussed more than once, there was little information available about being transgender when I was young. There was no search engine I could type the word transgender into, and the search wouldn’t return the 406,000,000 results I just got from my browser.

Of course, there was also no browser at the time. Or, frankly, an internet. Likewise, personal computers were only a few years old, and computers in general were expensive and cumbersome cabinets with tape drives. The idea of â€‹â€‹sitting at home and connecting to the World Wide Web was still in the hands of the â€œJetsonsâ€.

It was a cartoon. Look for him.

Likewise, there was nothing in the local library. The local library card catalog – yes, that’s how you found the books there was back then – had nothing on the subject to find under “trans-“. No, I didn’t drive a dinosaur to the library either.

Rather, most of what I learned came from either my mom’s tabloids, which focused on trans people like scandal and gossip, or my dad’s “girl magazines”, which on the rare occasion where they included trans material, were more erotically focused. side of trans lives, albeit through a non-trans lens. Much like the tabloids, transgender people were still aberrant in daddy’s magazines, but we had more than a tinge of sexual deviance.

The final source was courtesy of my third parent, television. This was thanks to the trans-related intrigues on some of the popular sitcoms of the time, such as “The Jeffersons” or “All in the Family”.

These stories, too, unfortunately, treated trans people like monsters, creating storylines that typically revolved around the threat to a star’s masculinity coupled with a tearful storyline that amplified a viewer’s feelings of pity for a trans character. .

As you can see, in a world where you would have a hard time finding our stories and, on top of that our stories weren’t told by us, for trans people it was very difficult to start seeing us as other thing than a monster, destined to be an outcast with a terrible and life-destroying scenario. A creature of scandal, salaciousness and sorrow.

When I started to walk the path to understand who I was, it became all the more important to find community. I needed to meet other people who could help me see who I really was, and provide me with the support and resources that I lacked.

Again, this is where this smallness creeps in. At the time, in the early 1990s, there were very few major resources. I was fortunate enough to find a dedicated transgender shop about half an hour from my house, and from there I discovered a support group an hour or more away that met in the back from a local hotel once a month.

The local group, like many others at the time, was really made up of a few handfuls of members and maintained a very insular existence. There were both spoken and unspoken ways that you had to be, and breaking those standards would often make your membership nearly impossible.

There were also a few national organizations, although they were more focused on locals. Likewise, you can find some clearinghouses for resources. Beyond that, there wasn’t much. We, as a community, existed, but in small pockets that were often regimented.

Then the Internet came along. Suddenly we could meet again. Online bulletin board systems have emerged, followed by dedicated spaces on commercial services such as CompuServe and America Online. Soon the web exploded with personal sites, resources and beyond. The community has grown from the Holiday Inn’s back banquet hall to an interconnected global space where, yes, your home computer can display hundreds of millions of hits on a single word: transgender.

Yes times have changed, but it’s not about who has it easier.

It’s a pointless argument when we all still have it very, very hard. In some ways, in fact, we may have had it easier in a time when people knew us a lot less and, therefore, less likely to develop organized fights against our very existence.

However, times have changed and, moreover, it will continue. It’s up to all of us to shape it into something we can use.

Gwen Smith didn’t climb a hill in the snow to get to school. You will find it at www.gwensmith.com