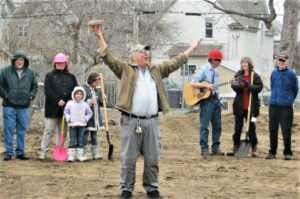 For me, Al Hildenbrand was one of about 20 people who joined Walker Church during the 13 years (1998-2011) when I was in England. I first knew him as the person who took on the role of the opening blessing after Gerry Bretzke passed away a few years before my return.
Al never said the blessing in exactly the same way, so it always sounded off-the-cuff, as if he had just discovered the wonder and majesty he was sincerely invoking upon his beloved community. I noticed Al’s infectious smile when he said “Hello, family!” right after the conclusion of the community song and joyfully launches into the blessing. And speaking of singing, I noticed that Al was in the Walker Singers, our church’s perfectly harmonized little choir, and he had a nice, rich baritone.
It was after the church fire that I got to know Al best. He was one of those people whose generative leadership qualities really stand out in times of crisis. And in rebuilding a new, redesigned Walker Church, Al’s more technical leadership also came into play. Having a clean slate to work on, Al fulfilled many of Walker Church’s dreams of having a sound system at state-of-the-art technology, Wi-Fi, HVAC, elevator and shared kitchen.
Because Al – of Al’s Electric Works LLC – was also known throughout the south Minneapolis community as a master electrician, who additionally had a background in electrical engineering and a pioneering interest in electronics, the World Wide Web and the digital age that emerged in our adult years (us baby boomers). As the newly appointed communications coordinator, I worked with him on planning how we would use our technical infrastructure to inform and spread our own particular gospel.
I saw another side of Al, his tender, loving and spiritual side, due to his personal tragedy of losing his young adult son, Cole, in 2018. It was at Cole’s funeral at Walker Church that I realized that Al had a huge community outside of Walker Church, which made me appreciate all that he invested in the church even more. Al’s eulogy for his son was one of the most profound and moving speeches I have ever heard.
When I attended Tuesday communal meals, Al was always someone I wanted to sit at my table with, even if that wasn’t always possible. Unsurprisingly, he was very popular at social events. Some people made jokes about Al’s tendency to “talk”. He had a prodigious knowledge of subjects from the mundane to the obscure, and was obligated to tell you everything he knew. I kind of enjoyed being the recipient of this intelligence stunt.
Al Hildenbrand died on April 3 this year at the age of 74. From his obituary I learned more details about his life, such as the Evangelical United Brethren upbringing, the teepee he sewed using a treadle sewing machine, his love of motorcycling the horseback riding and his first job as a guard at a scout camp. (See this loving and interesting document on the Star Tribune website: www.startribune.com/obituaries/detail/0000422304.)
We held a celebration of Al’s life at Walker Church on April 16th. We heard personal stories of Al’s brother, Gar, his stepson Mason, the son of his late cousin, Harley, and others in whose lives Al was a loving and important figure. Losing Al is going to leave a huge hole in many lives.