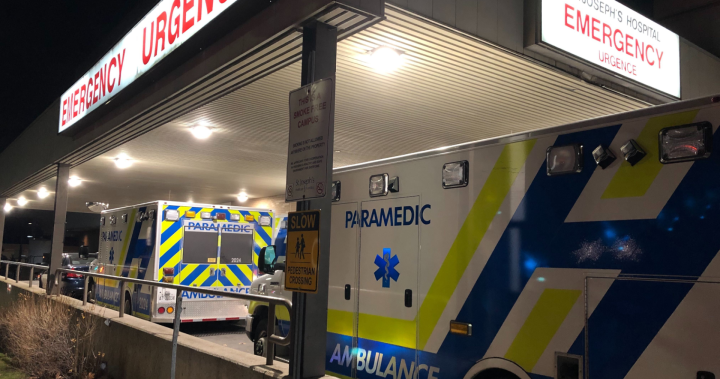 Leaders of one of Hamilton’s two hospital systems reaffirmed occupancy rate challenges in a statement this week amid an ongoing battle with the COVID-19 pandemic.

“Unfortunately, our reality in Hamilton and throughout our region remains very much under pressure. We are still feeling the burden of the Omicron wave and continue to see excessively high demand for hospital care,” HHS said in a statement Wednesday.

The agency says more “ideal” occupancy rates are between 85 and 95 percent.

Individual facilities like McMaster Children’s are sitting at around 100%, the Juravinski at 121% and the general at 109.

The situation at St. Joseph’s is similar with acute occupancy at 94% as of Thursday, with intensive care units above normal staffing at 107%.

Regional figures in the Hamilton-Niagara-Haldimand-Brant-Burlington (HNHBB) networks cite adult acute occupancy at 105% on Wednesday and critical care capacity at around 90%.

Last week, HNHBB Hospitals revealed that 21 patients requiring round-the-clock medical care had been transferred to other facilities in the past three weeks. On Thursday, that number rose further by six to 27.

“We have taken a common approach to enable transfers as needed, focusing on patients who are most medically fit for transfer,” the HHS statement said.

“Patient transfers are very difficult situations but unfortunately we have no other option as critical care patient volumes remain high.”

The HHS update comes as a suspension of elective surgeries, to preserve Ontario hospital capacity during the Omicron surge, resumed this week alongside the lifting of public health restrictions on businesses and medical professionals. social gatherings.

Phased recovery includes services such as diagnostic imaging, cancer screening, scheduled ambulatory care, and elective/urgent pediatric care. All other elective and non-emergency services remain on hold as of Thursday.


HHS leaders say they are not yet able to resume interrupted services “on a meaningful scale” due to current urgent and emergent care pressures.

“While we have initiated ramp-up planning, we will proceed with great caution in resuming service and will coordinate our efforts across all sites and programs,” the network said.

Combined, the Hamilton networks registered 224 COVID patients at the city hospital on Thursday.

That’s 16 fewer than the 240 reported on Tuesday. There are 34 in intensive care units, down four from two days ago.

Ontario is reporting 2,797 people hospitalized with COVID on Thursday, including 541 in intensive care units.

There are nearly 300 healthcare workers in total between St. Joe’s and Hamilton Health Sciences who are now in isolation due to potential exposure to COVID.

52 institutional outbreaks confirmed in Hamilton, 24 in facilities caring for the elderly

Homes containing the elderly represent the largest group of outbreak cases in Hamilton as of February 3 – about 850 cases in total from 24 surges.

Public health data revealed that about 730 of them are linked to 16 long-term care homes (LTCHs) with outbreaks.

The city’s nursing homes account for just over 120 cases in eight surges.

Five LTCFs combined account for just over 400 of the cases in homes, with Heritage Green in Stoney Creek having 115 reported cases.

More than half of all cases in homes with the elderly are residents, around 380 in workers.

2,797 people in Ontario hospitals with COVID, 541 in intensive care

As of Thursday, there were just over 230 reported COVID cases across nine shelter outbreaks in Hamilton.

Public health has recorded five more COVID-related deaths in the past two days, bringing the pandemic total to 491.

Two of the deaths are believed to have been people in their 80s, two in their 70s and one in their 30s.

Over 82% of eligible Hamiltonians fully vaccinated

About 87.3% of residents aged 12 and over received at least two injections, while about 89.9% received a first dose.

The city is still behind the provincial average, which has 89.3% of those 12 and older with two doses and 92% with a single dose.

Excluding children aged five to 11, Hamiltonians in the 12 to 17 age group have the lowest vaccination rates among eligible people in all communities.

Hamilton is also slightly behind the provincial average for first doses for people aged 5 to 11 – 49% compared to 53.9% in Ontario.

The city is tied with second doses in the age group at 19% compared to the province’s 20%.

9 benefits of an instant cash loan