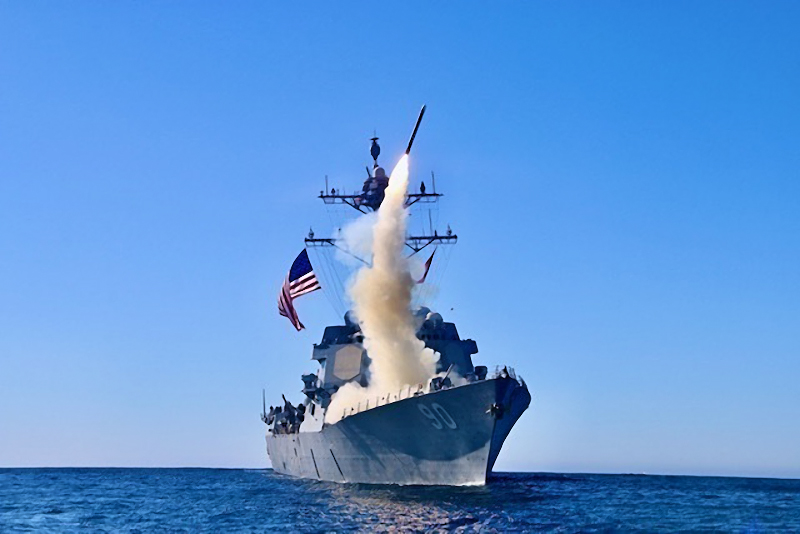 The improved maritime strike variants of the Tomahawk Cruise Missile include improved navigation and communications that allow the Tomahawk to strike moving targets at sea.

In this question-and-answer session with Kim Ernzen, vice president of Naval Power at Raytheon, we discuss systems that enable DMO such as the SPY-6 radar for air and missile defense, the Cooperative Engagement Capability sensor array and Tomahawk Block V.

Breaking Defense: How has the DMO evolved since the Marine Corps developed the concept a few years ago?

Ernzen: It’s starting to take shape as the Navy has a better understanding of how to take the existing infrastructure and really turn those assets into different nodes in the network. When we look at the products we supply to the Navy, everything from sensors to effectors and the network behind them, especially the Cooperative Engagement Capability (CEC) sensor network with built-in fire control capability that creates a one and only real-time integrated system. composite image of runway air – the Navy is pushing us and other industry partners to start making these systems talk in a different way so that you can allocate your assets very differently.

One of the things that excites us is future capabilities. For example, our new S-band radar, the AN / SPY-6 (V) 1, which we call the SPY-6, is coming into the fleet and we are currently installing it on the first destroyer Flight III, the DDG 125 destroyer. Arleigh Burke-class missile launcher. The SPY-6 offers several advantages over traditional radars, including significantly greater detection range, increased sensitivity and more precise discrimination.

It was designed for seven classes of ships, and each variant uses the same hardware and software. This modular construction makes them more reliable and less expensive to maintain, while increasing the number of nodes on the network.

SPY-6 radars are constructed from individual building blocks called modular radar assemblies, or stand-alone radars that come in 2’x2’x2 ‘boxes. These boxes stack to meet the mission requirements of any ship – a feature that makes the SPY-6 family the Navy’s first truly scalable radars that specifically help support DMO missions.

Breaking Defense: What other improved systems are you putting in place to enable BMD?

Ernzen: CEC is the network the Navy uses not only for command and control, but also for communications and data delivery to the entire fleet. We continue to work on a multitude of improvements to this system. We are improving it as the backbone of the Navy and also working on initiatives to reduce it and install it on potential Navy aircraft. This would increase the number of nodes in the CEC network.

And, of course, we strive to improve long range fires. We are currently working on maritime strike variants for the Tomahawk cruise missile and have started delivering V Block upgrades, which include enhanced navigation and communications that allow the Tomahawk to strike moving targets at sea and hit more diverse land targets. This gives you a high performing effector which, again, gives you another node and more capability for DMO.

Breaking Defense: I’ve heard the term Naval Operational Architectures (NOA), but there is very little about it online. What exactly is NOA and where does your technology fit into it?

Ernzen: It’s a philosophy and the overall intent of how the Navy wants to connect these systems. You’re not going to see it as a line item on a DoD budget, for example.

What we are seeing and where we are supporting the Navy is continuing to research how we can optimize our systems. It’s not just about the intent a particular product was designed for, but also how we can integrate it with other systems that may be installed on ships, submarines or ships. other platforms.

We have also increased our focus on submarine activities because obviously the Navy covers all areas that all rely to some extent on the same space, surface and submarine resources. One of the technical challenges that we are working on is solving the question of how to start creating an underwater network, because it is just as important as what you can see above the water.

Ernzen: These are some of the technological challenges that we are working on. It’s a different midrange and you have to deal with the acoustics. How do you make sure you understand the message you receive? Current technology does not allow you to hear as far as you potentially would like.

Together with some of our other sister divisions, we are developing innovative technologies that are beginning to show a real ability to leverage a different way of solving the subsea network equation.

Breaking Defense: you use advanced digital tools in the development of the systems we talked about. How does Raytheon use these tools to activate DMO?

Ernzen: Our industry is obviously heavily focused on digital transformation and we are no different. We have invested millions of dollars over the past few years to make sure we have the right tools. We have been at the forefront of using agile development and DevSecOps in some of our program areas. We do this frequently with respect to CEC, as threats continue to evolve rapidly. When you can insert software upgrades into existing hardware, you can add capacity much faster than developing new hardware. And so we worked closely with the Navy to see how we’re really leveraging DevSecOps.

We are also leveraging our digital capability for missile upgrades so we can continue to stay ahead of evolving threats. It is definitely something that we embody and in which we continue to invest.

Even though the following example is outside of the Navy, we have an Air Force program that has been done entirely digitally – the Long Range Standoff Strike Weapon (LRSO). It really culminated all our efforts to date and continues to drive us forward when it comes to digital transformation. (Note: In July, the Air Force awarded Raytheon a $ 3 billion engineering and manufacturing development contract for the LRSO, which will replace the 1980s AGM-86B cruise missile. Force, the aging ALCM will continue to face increasingly significant operational challenges against emerging anti-access / area denial threats until they are replaced.)

Breaking Defense: Tell us briefly about your digital modeling and simulation as part of your digital transformation efforts.

Again, as we talk about global architectures like DMO, we can sit down with the Navy and look at not only our systems but also other systems that they have in the fleet to really understand how we can change things. things that can make a huge difference. We have invested heavily in our modeling and simulation capabilities to make sure we understand what the Navy needs to deliver to the industry. The goal is to understand threats, how they evolve and how we can then evolve our capabilities to overcome them.

Raytheon’s SPY-6 air and missile defense system is made up of modular building blocks for maritime operations across manned and unmanned ships.

Breaking Defense: Tell me about the tangible benefits and applications that help the Navy achieve its goals for the DMO.

Ernzen: We’ve talked a bit about SPY-6, and one of the key elements of this program is to give the Navy the ability to install the air and missile defense system on both manned and unmanned ships. The beauty of SPY-6 is that it has an incredibly scalable architecture and is built on a base of modules that can scale up or down, as we saw earlier. It really gives the Navy flexibility.

Another of our systems that facilitates DMO is the Naval Strike Missile, which has been developed for the beyond the horizon defense of coastal combat chips and future frigates, and is also suitable for land attack missions. because it can move up and down with the terrain.

We are now starting to see the missile cover different services. From its initial instantiation on the Littoral Combat Ship, we are now working with the Marine Corps to help them apply the system to their expeditionary force. The integration of the naval strike missile into its force structure allows the navies to share costs and interoperability with the navy. This provides additional connectivity for DMO because you have a product that can span multiple services with different launch capabilities.

In addition to evolving the CEC that we talked about earlier, we have a plethora of Navy and Marine Corps products that play an important role in DMO.

Ernzen: Raytheon understands what the Navy wants to do with distributed maritime operations. We understand the overall NOA architectures, and we believe that we have a lot of components that provide this connective tissue. We always look forward to partnering with the Navy in evolving these products so that they can truly provide the Navy with the capabilities to conduct distributed maritime operations.

Driving the finest and most innovative technological advances in the industry