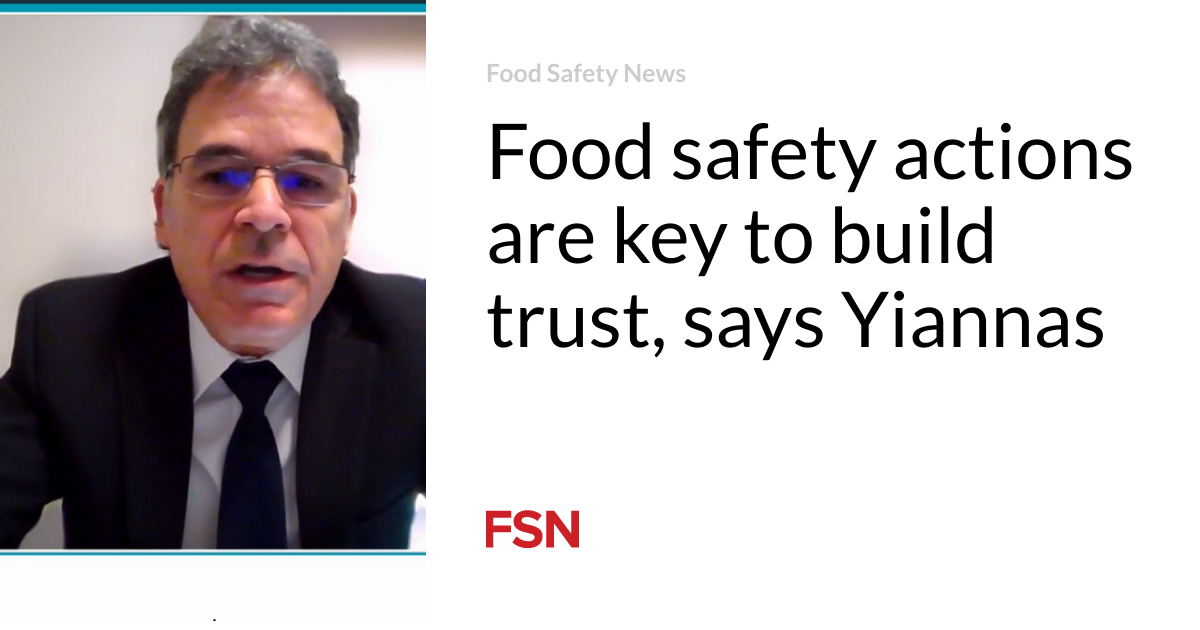 Food safety actions speak the loudest when it comes to building trust, according to the U.S. Food and Drug Administration’s Deputy Commissioner for Food Policy and Response.

Yiannas gave two examples of what the FDA is doing to increase consumer confidence.

“The first is food traceability, we are releasing a final rule later this year. We know from a food safety perspective that in the event of a food crisis, quickly tracing the source can allow us to withdraw the product from the market and shorten the epidemic curve, perform secondary intervention and prevent other diseases.We believe that better food traceability is a matter of transparency and that increasing this in the food system will engender trust,” he said.

“What is the opposite of transparency in food? To me that’s what we have in today’s food system, too much anonymity, we really don’t know where these products come from, under what conditions they were produced, what certifications they really have obtained and consumers do not know it either.

“I often say that better food safety will start and end with better data. We have the ability to use tools to convert large volumes of existing massive data into actionable preventive information. There’s this big gap, but new tools like artificial intelligence, machine learning and the Internet of Things are bridging that gap,” he said.

“In the age of data, collaboration will increasingly involve public-to-public and private-to-public organizations sharing data and converting it into information, and the entire food system will become smarter together. At the FDA, we are working on data trusts and have started a few projects to achieve this. »

Yiannas said we are experiencing a “mega loss of consumer confidence”.

“Social scientists tell us that consumers trust institutions, governments, businesses, corporations and even nonprofits less. On top of that, people are increasingly polarized over issues of politics, climate change and pandemic management. What about food? Do you think we as a society are becoming more polarized on food? I think the answer is yes,” he said.

“After three decades in the profession, I am sad to say that I see food increasingly dividing us. I think food should unite us. We hear people say I want local food, others say they’re ok with global food. Some people want organic and others are fine with conventional food, it tends to be more affordable. Some eat only natural foods and others accept processed foods. Today we have a problem in many countries where too much food is as bad as too little food.

“Never before in history has the responsibility of providing safe, available and sustainable food to so many people rested on the shoulders of so few and never before have the consequences of not achieving this right been greater.”

More than 4,200 attendees registered online for the four-day event and approximately 1,000 registered to attend in person. Of these, almost 90% come from Europe, the rest from Africa, Asia and North America.

EFSA’s perspective on One Health and the collaboration

“The food system is in crisis: hunger, obesity, food waste, resource depletion and loss of biodiversity. With this conference, we would like to explore how food safety and more integrated health assessments can contribute to the transformation of food systems,” he said when opening the conference.

“The One Health concept aims to balance and improve the health of humans, animals and the environment. We believe the principles of One Health make it an ideal tool to support our work to address the complexity and urgency of the health challenges ahead. At EFSA, we believe that by applying these characteristics, our work on food safety will progress, be more fit for purpose and better inform policies aimed at transforming the food system. One Health acts as a springboard, linking food security to sustainable food systems.

Url said there is a need to see faster innovation in scientific methodologies to meet the challenges ahead.

“There is a problem of trust – how can we anchor our scientific advice in a society that is ready to accept it. Even if the outcome is not liked due to differences in values, people trust the process,” he said in a subsequent panel discussion.

“Everyone talks about collaboration and says yes, we need to collaborate more, it’s obvious but it’s not done enough, so what are the obstacles? I think something is fundamentally wrong here, so let’s fix it. Collaboration adds a layer of complexity, you lose autonomy and give something away for a bigger goal, which means it takes longer. There may be cultural or linguistic differences, the budgetary cycles and the objectives of the organizations are different. Maybe we need to make collaboration a goal of organizations and not just something that can help us on the sidelines. »

European Commission on regulation and the role of EFSA

“The COVID-19 pandemic and Russia’s invasion of Ukraine have highlighted how much we need a robust and resilient food system that provides sufficient and affordable food at all times,” he said. she declared.

“It also made us realize how interconnected our health, ecosystems, supply chains, consumption patterns and planetary boundaries are. The increasing recurrence of droughts, floods, wildfires and new pests constantly reminds us that our food system is under threat and needs to become more sustainable and resilient.

Kyriakides also mentioned the 20th anniversary of the General Food Law Regulation and the establishment of EFSA.

“The common definitions, objectives and general principles of the Regulation have redefined and shaped EU food law and policy. Chief among them is the principle of risk analysis, according to which food legislation should be based on science,” she said.

“EFSA’s scientific excellence has served to give EU measures a solid scientific basis. It maintained confidence in the EU food supply. It has improved EU food safety and standards and certainly helped raise international standards in the process. Thanks to EFSA and General Food Law, the European Union can boast of having one of the strongest and most effective food safety systems in the world. »