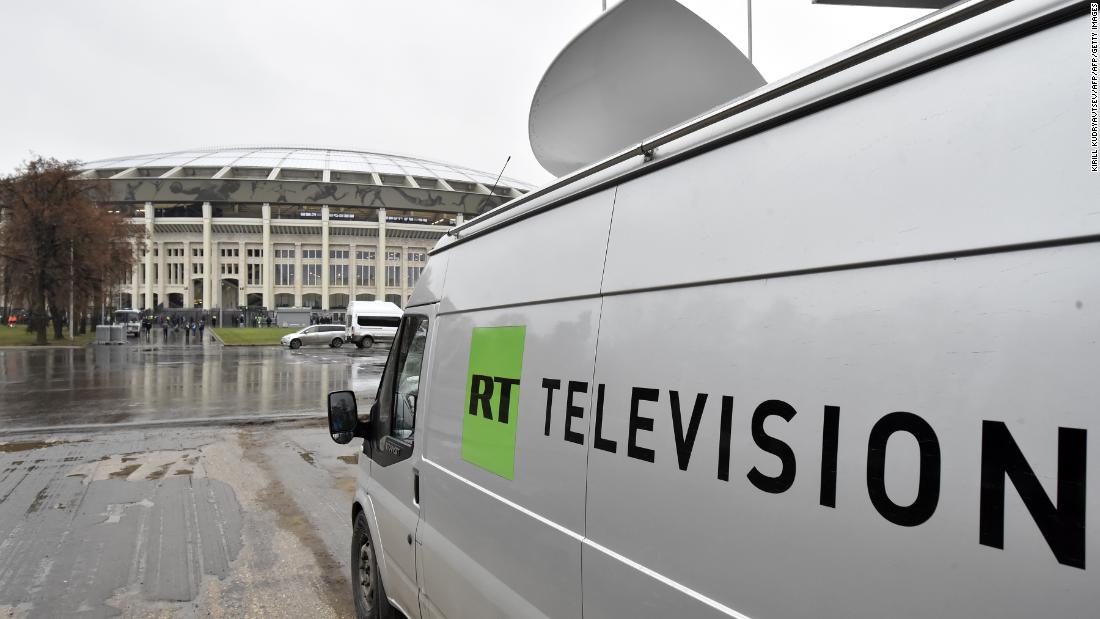 By Cody H. Mauro On Mar 3, 2022
Share
On Wednesday morning, as Russia’s unprovoked war on Ukraine entered its seventh day, I turned on RT, the Russian-controlled network that has in recent days been banned in Europe and abandoned by TV stations. of the whole world. Founded in 2005, RT, which operates several channels including RT America, was one of Russian President Vladimir Putin’s biggest megaphones around the world. It offers insight into how the Kremlin would like to portray the world and its role in it.

For several hours I watched the channel and was struck by the brazenness with which its hosts and personalities worked to deceive its audience and distract them from the issues at hand. The main thrust of RT’s coverage presented Russia as a mere victim of Western aggression, a country forced to launch a limited “military operation” after its hand was forced by a high and mighty NATO that failed to showed no interest in taking Moscow’s security concerns seriously.

Here is a breakdown of what I observed on the network.

Peter John Lavelle, the host of RT’s flagship show “Crosstalk”, put it this way: He said the failure of the “liberal order” put in place by the West was to blame. “It’s so irritating,” Lavelle said on her show. “The way it’s presented: Ukrainian democracy. Well, it has nothing to do with Ukrainian democracy – if you can say it even has one… It’s a matter of security. .There is security only for other countries.”

In its news programs throughout the day, RT’s on-screen graphics carried breaking news alerts supporting this notion: “RUSSIA: NATIONAL SECURITY THREATS LEAVE NO CHOICE BUT TO START A MILITARY OPERATION.” Another chyron said: “RUSSIA SAYS ITS OBJECTIVES IN UKRAINE TO DEMILITARIZE AND DENAZIFY THE COUNTRY.

In fact, according to RT, Russia wasn’t even necessarily the aggressor. The channel has sometimes said that Russia is a “liberator”, essentially freeing people from menacing forces in Kyiv. “THE MILITIA SAYS 40 TOWNS AND VILLAGES ARE NOW LIBERATED IN ON-GOING OFFENSIVE,” a chyron said.

A packet broadcast repeatedly by the network described life under Ukraine as unbearable for those living in the Lugansk region. In another package, RT focused on damage to residential buildings in the Donetsk region.

Conspicuously omitted from the coverage, the focus has been on the unbearable lives of Ukrainians whose towns are under attack by relentless Russian forces. I haven’t seen many news reports showing the damage done by Russian forces as they tried to take over the country. Or the coverage of people in cities like Kiev who live in terror and sleep underground in bomb shelters. Or the coverage of the hundreds of thousands of people who simply chose to flee the country for their safety. These inconvenient facts were not the focus of the RT narrative pushed.

>> Also excluded from RT’s coverage: the consequences of sanctions and other actions by the West on the Russian economy.

Other areas of interest

While RT has turned a blind eye to inconvenient facts, it has found time to paint Russians who aren’t even in the war zone as victims. One segment focused on how the Russians are “dealing with hostility in Western countries” over the “situation” in Ukraine. He quoted a man in the UK who said he was ‘not ashamed’ to say he was Russian, but ‘afraid’ and ‘worried that society has this perception that all Russians are bad’ .

At other times, RT aimed to portray Russia as a country that cares deeply about humanitarian issues. The network aired a story about how Russia took in school children displaced by the war: “RUSSIAN SCHOOLS WELCOME HUNDREDS OF SCHOOLCHILDREN FROM DONBASS.” Against the backdrop of uplifting music, the segment featured interviews with several children expressing how grateful they were and saying that Russia was ready to welcome many more children.

RT is suffocated by public discourse now that Russia has invaded Ukraine and its role in promoting the Kremlin’s dishonest arguments has been exposed. But the media’s propaganda has been broadcast across the world unfettered for years and years, coloring the minds of countless people, many of whom distrust Western news outlets. It’s a shame that it takes a war for companies to realize that the programming they bring into homes is important. Russia’s real-world war started last week, but it’s the information war that started long before that. Imagine if these companies had acted earlier how things might have been different.

— RT resignations continue: “Maria Baronova, the editor-in-chief of RT’s Russian-language edition, said she had resigned from the outlet in an interview with Znak outlet,” reports Aidan McLaughlin. (Mediaite)
— “The Russian invasion is clearly making headlines globally – but how it is portrayed by the media in the East and the West is a completely different conversation,” writes Rezwana Manjur. (Marketing)
— Evelyn Cheng examines “how the Chinese media covers Ukraine”. She notes that state media has used the term “special military operations.” (CNBC)

Jenkins the valet, the SALT team to produce an audio experience