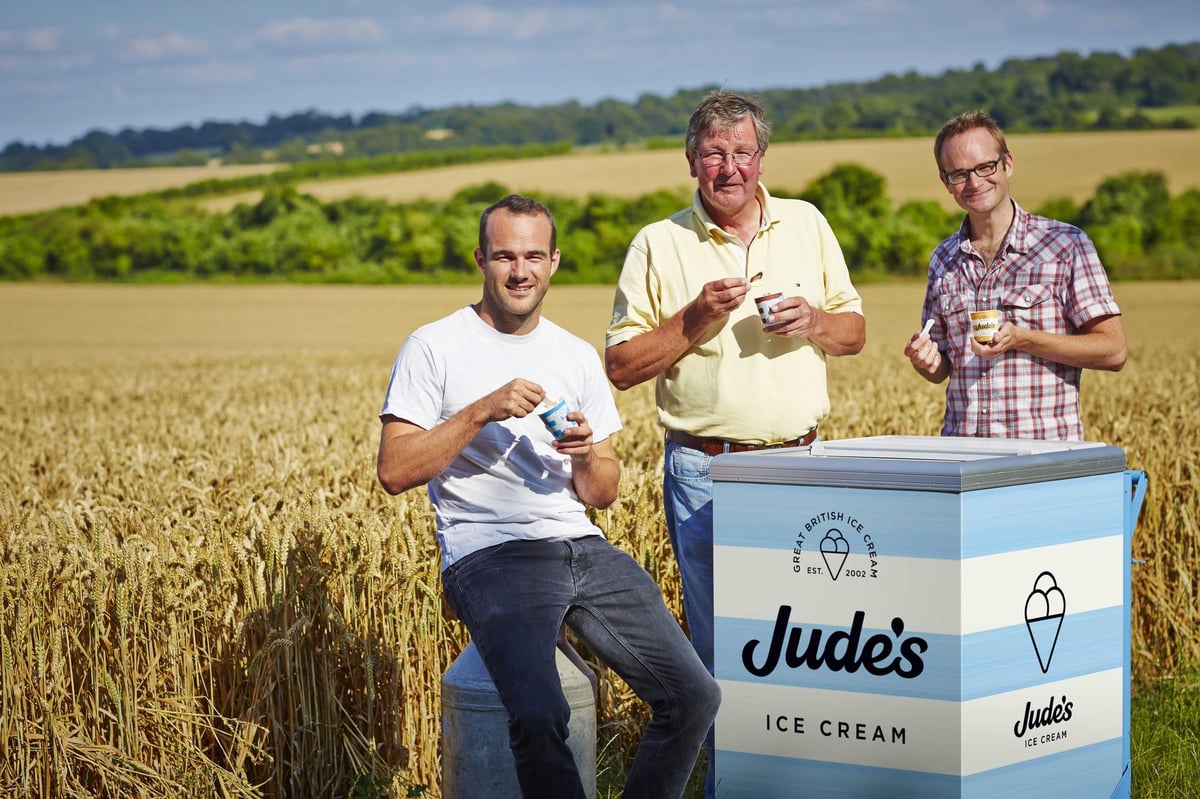 Jude’s ice cream: The Hampshire company is trying to change the world, one spoonful at a time

Or, perhaps more likely, you may have seen it in the freezers of many local supermarkets, perhaps Sainsbury’s, Waitrose, Tesco or the Southern Co-op.

Its understated yet elegant striped tubs are beginning to be recognizable as they grow and grow.

Register to our daily newsletter

Chow, Theo and Alex Mezger. Jude’s Ice Cream is based in Twyford, Hampshire

However, few people realize this is a Hampshire company, aiming to make the world a better place, one step at a time – and not just by creating new flavours. While it prides itself on the taste of peach and champagne, and its minty chocolate chips, Jude’s has the health of the planet very much at heart.

Jude’s story begins 20 years ago when Theo Mezger, after years of working in the City, decided to start his own business.

Surrounded by cows, he opts for ice cream and, having mastered the basics, creates a miniature factory in a barn in his house in Easton, near Winchester.

Inside Jude’s Factory near Twyford

Starting with supplying the village pub, things quickly grew. Her sons Chow and Alex and their best friend James joined the fledgling business and in time it moved to its current home – a beautifully bucolic industrial estate just outside Twyford.

And that’s when things started to take off. The recognizably striped bins arrived around this time, and the retail – rather than supply – section of the business exploded, leading to an expansion that now has between 50 and 60 employees on the books. This – and the large factory space – is a far cry from the early days, but one factor that has remained the same is the company’s social conscience, although that has also evolved.

Just as it was the first company in the country to make salted caramel ice cream, it has never stopped trying to innovate in other areas.

“From the beginning, our approach has been that business is not something separate from community or family life,” says Chow. ‘It’s not alone.

“Literally, it was like that at first. Our team was from the village and we were based in the village where we grew up.

‘Jude’s is fully integrated into the lives of our entire team. This impacts the families of our team, as well as the community of Twyford and the community where our team lives. It impacts our supply chain, it impacts the environment and our customers.

“The point is, business is not something separate from life, community or people. This is our approach. That’s why “business is a force for good” is a no-brainer. We are absolutely determined that Jude’s goal is to ‘bring life’.’

Beautiful words perhaps – but words that have evidence and evidence behind them.

In addition to ice cream, Jude’s emphasizes the environment, with the decarbonation of the central board.

“In Jude’s life, the most important thing we can do is reduce our carbon footprint,” Chow said. “There are not enough offsets in the world to keep emitting carbon.”

And to help with that, Jude employed the services of carbon expert Mike Berners-Lee (the brother of Tim Berners-Lee who is credited with inventing the World Wide Web).

Professor Berners-Lee and his Small World Consulting team gave Jude’s goals for reducing the amount of carbon used. Marginal gains became the mantra – where efficiencies could be achieved in packaging, transportation, energy supply and ingredients.

Chow says the goal is not just to feel worthy but to exert pressure on the rest of the food industry.

“Everything we do is seen through the lens of the best possible ice and carbon intensity,” he said.

“We also ask all of our suppliers for ingredients with a carbon footprint of everything. “A lot of people haven’t done this job yet, but if we ask this question, everyone will do this job.

“Our sales pitch shows customers how we are reducing their carbon footprint throughout the supply chain.”

The company has been named B Corp, a program run by B Lab, which describes itself as a “nonprofit network transforming the global economy to benefit all people, communities and the planet.” In short, companies must be audited to show that they behave responsibly in five areas: governance, workers, customers, community and environment.

And on an environmental level, one area that has exploded is that of vegetable ice cream, moving away from dairy products.

Highlighting the ramifications of animal product emissions, Chow said, “Seventy percent of the world’s agricultural land is set aside for grazing animals or growing animal feed. We should be running out of reasons not to eat plant-based.

“With our approach, we always prioritize quality. Our herbal products are so good. They taste great – that’s the number one goal. But it is clear that plant-based products are better for the environment.

Society’s general shift away from meat and dairy-based foods is being replicated at Jude’s – seven years ago Chow said one percent of their products were plant-based, and by 2024, it should be half.

“All the younger generation coming in understands that,” he said. “We want to be the pioneers and develop products.”