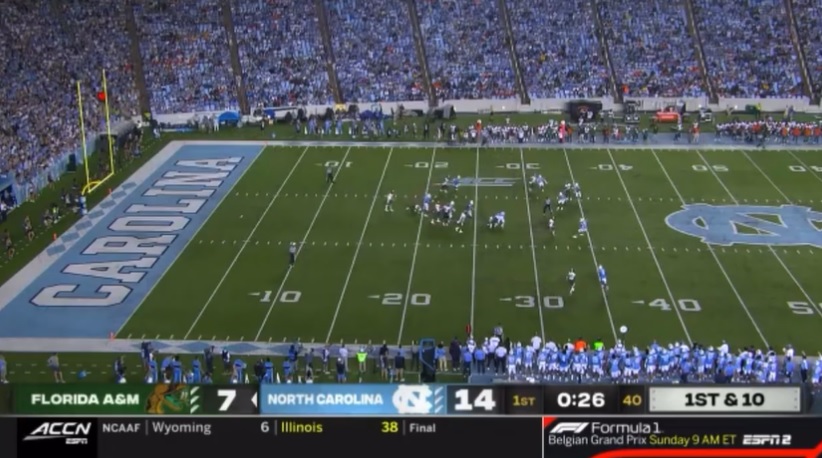 Lightning forces ACC network to use All-22 camera for part of UNC vs. Florida A&M game

Those watching Saturday’s college football game between Florida A&M and North Carolina may have noticed a drop in their video stream for part of the game. Ultimately, this was not due to errors by the ESPN-owned ACC network, which aired the game. Rather, the video glitches were mandated by outside forces.

There was lightning in the play area for a while. As a security measure, ESPN had to shut down some of the cameras. This left the broadcast with what was essentially an All 22 camera, although the score bug remained intact and the announcers still called the action.

ESPN had to shut down some of its cameras and now we’re watching North Carolina – FAMU from not quite the Goodyear Blimp pic.twitter.com/792HqIDmJM

Lightning is not uncommon, especially during the first weeks of the college football season in late August and early September. What made this situation unusual was that the game continued. Normally, if the lightning in the area is so strong that the side cameras need to be turned off, it’s bad enough to delay the game. Obviously, that was not the case here. Things were eventually restored and the game returned to streaming with better cameras.

This game just seems to have some sort of curse. On Friday, it was reported that due to the ineligibility of several players on the team, Florida A&M was unsure if they would be able to play. Later that day, it was announced that the Rattlers would play, but without 20 players.

Fortunately, the match was played and the weather problems were only temporary.

Inside the Rise of Expensive Pawnbrokers – and Affordable Alternatives