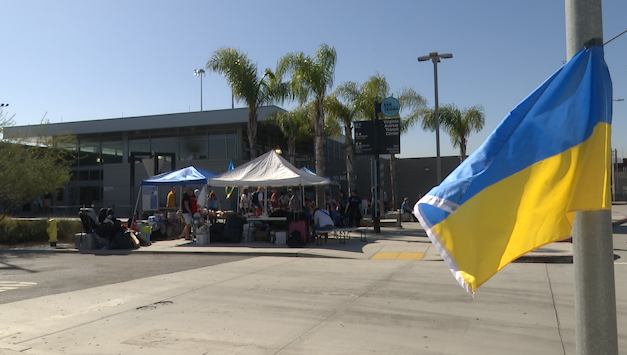 SAN DIEGO (Border Report) – Katia Lolia said she couldn’t believe how easy it was for her mother and sister from Ukraine to obtain humanitarian visas and enter the United States via Ped West, l one of the pedestrian crossings at the San Ysidro port of entry.

Lolia lives in Salt Lake City but met her family members in Mexico City a few days ago.

Together they flew to Tijuana.

Her mother and sister spent a day in a shelter before being bused to the border and allowed to enter the United States.

“We are very grateful that it was a very simple process for Ukrainians,” Lolia said, adding that the process was facilitated by a network of volunteers upon their arrival at Tijuana airport.

Dormant for two years, the California border crossing is only open to Ukrainians

“Ukrainian volunteers with Ukrainian flags, they meet you at the airport and they check you in, they give each person a number,” she said.

Many volunteers come from north of the border and provide transport services for migrants, the majority of whom fled Ukraine after Russia launched an attack on their county. They also find them accommodation or take them to a shelter recently opened by the city of Tijuana.

“They are so nice, they even have music concerts for migrants at the shelter,” said Lolia, whose mother and sister were taken by bus to the border where they crossed Thursday morning and got their visas. .

Lolia met them on the north side of the border crossing as they exited.

“They are allowed to stay in the United States for a year and who knows what it will be like in a year, if there is still a war they are allowed to extend, if the war is over they have to come back” , she says.

Opening of a refuge for Ukrainian migrants in Tijuana

Pastor Phil Metzger, one of the volunteers, said they had lost track of the number of Ukrainians helped, he believes it is well over 2,000.

“We try to catch them immediately at the airport to make sure people don’t get lost or picked up by the wrong people who have other motives,” Metzger said. “We give them a number, we send them through a digital system to track them until they cross the border here.”

Metzger says every migrant has one thing in common when crossing the border.

“They are tired, a bit scared but they really feel welcome, they come to be free and being able to go out is a big deal.”

Metzger told Border Report that outside of the city of Tijuana that operates the shelter, volunteers provide nearly all of the resources to help migrants.

Visit BorderReport.com for the latest exclusive stories and breaking news on issues along the U.S.-Mexico border

But he’s worried as more migrants arrive in Tijuana their efforts could fail.