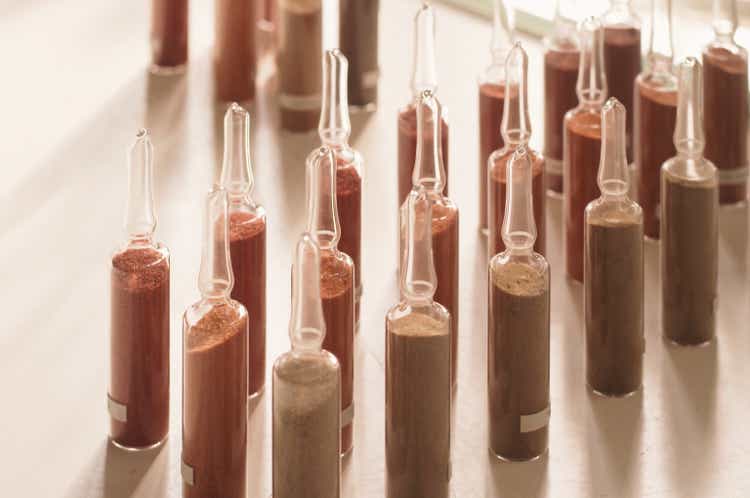 The problem of rare earths comes in two stages

As I have noted several times here, the rare earth problem has two stages. The first is to find good concentrations of the rare earths themselves. The second is to separate them into their individual elements. Both are very different problems and almost all the cost is in this second. This is where the value of the industry is concentrated.

Rare earths aren’t rare – nor are earths – and it’s actually trivially easy to gather a few thousand tons of something with significant rare earth content. Almost all zirconia processors – to give just one example – will have them. The same will be true for most other mineral sands operations. I can think of half a dozen places to earn more – phosphate mining tailings, tin slag, well, I’m not going to make the list longer and more boring.

However, separation plants are big and expensive things. Capex for a new one is probably around a billion dollars for a large-scale operation. (Here is Lynas’ original estimate for their Malaysian plant. $220 million which later went well over and required a hugely dilutive recapitalization). It’s just a function of the difficulty of the chemistry. Until – and there are people working on it, trust me – someone comes up with an entirely new concept here, that’s how it’s gonna stay too.

It is possible to reduce this Capex by abandoning the process of extracting all the rare earths from the concentrate. This is what Pensana is doing with its new factory in Great Britain (Here is Pensana’s current estimate of a Capex of 500 million dollars for its system). Just mine the high value magnetic metals and leave the more minor values ​​still mixed in and not mined or even sold. A very valid approach.

However, even that costs £200m for a production size plant (i.e. Pensana’s cost for the separation plant alone, without the associated mine).

So what tends to happen is that these large Capex and high volume plants don’t want to have heterogeneous supplies of concentrate. A few hundred tons from there, a thousand from the other source, that’s not enough. Instead, the desire is for homogeneous supplies in quantity. Preferably just from a mine to a factory. The same material, day after day, being processed. This militates in favor of rare earth mines, not supplies from the by-products of other processes.

OK, Rare Element has the plan to deal with this. They have a nice depot at Bear Lodge. No, it’s great, really, I’ve said it before.

Except that they have done almost nothing at all to try to obtain authorization to exploit this deposit. Based on logic (see the older article for details), it is very unlikely that they will get such a permit. Of course, it’s all politics and we may or may not agree with that, but it just doesn’t seem likely at all.

But as I said, the rare earths business is twofold. And Rare Element, in association with its majority shareholder, Synchron (itself owned by General Atomics) has an answer to the other half. A change in the method of separation of rare earths. Reading between the lines, I think it’s a method using traditional techniques but optimized for – and therefore cheaper by discarding certain other elements – Nd/Pr that is attracting such interest these days.

Nothing wrong with that.

There’s so little wrong with that that Rare Element won a DoE award for half the cost of building the pilot and demo version of the factory using the new Synchron technology. approximately $21 million. They were also able to raise $25 million – so their half plus a bit – with Synchron taking its allocation of new shares, with the market supplying the rest.

There’s nothing wrong with that either. They will build the plant over the next two years, process some of the Bear Lake concentrate they have on hand, and prove this new technology.

As part of the process of building a new rare earth production system, everything looks good.

Just to note what the new process is. Rare Element is quite tight-lipped about the exact steps, but the basic idea can be guessed:

Not a million miles from the Pensana solution. Or even something MP Materials (MP) does in Mountain Pass. Each of them is different in details but the same basic approach. Instead of processing all the concentrate into individual, separate elements, optimize the process to only have access to those that are truly desired. Thus, MP Materials extracts the cerium from its concentrate before sending it for further refining. Not having to pay the costs of this additional refining on that cut cerium portion saves money – because any cerium produced is worth less than the cost of refining it.

The same basic idea at Rare Element. The Nd/Pr fraction is the one really sought. Lanthanum loses money – processing costs exceed revenue – but lanthanum needs to be processed to get to Nd/Pr fraction. Cerium can be removed, as MP Materials does. OK, this reduces the price of access to ND/PR, great. Then the rest of the material, containing samarium, dysprosium, terbium, etc., is not processed at all. This again remains in concentrate form and, at this point, maybe not even monetized.

It is not a new miracle technology that solves the basic problem of rare earths, that processing costs are high. But it is the one that minimizes, as far as possible, these costs to access the rare earths currently in demand. We do not yet know the real costs of this operation.

But what is the advantage of Rare Element?

There is a small essential part of this that we must understand. From my previous piece:

One would think that the intellectual property developed to separate the rare earths has value if applied elsewhere. The problem is that RER does not have this IP address. The deal with Synchron is that the IP, if it is to be used more widely, belongs to Synchron. The RER has the right of use on the Bear Lake project but nothing else. That is to say, the RER has the right to use the new extraction technology but only on its own and unique property, not more widely. There will be no revenue for the RER from the wider possible use of this IP.

It is therefore much less interesting for us to be shareholders of Rare Element. I totally agree that a new system for handling rare earth concentrates would be helpful. One that beats the competition on cost would actually be great. Current costs are around $19 to $20 per kg of treated rare earth concentrate. Beat that by a substantial margin and there’s money to be had.

But note how much of that value – if the new method works at scale – goes to Rare Element shareholders. Only that amount that comes from the use of technology at Bear Lodge. The use of this same technology elsewhere in the world does not. It belongs to Synchron.

Yes, it would be possible – if this new technology works well – to make money from contract processing for other sources of ore. But that still doesn’t really solve the rare element problem, does it?

I agree that these developments are interesting. But there are these two barriers to meaningful value accruing to Rare Element shareholders. One is that the larger value of this new separation technology – if it works – goes to Synchron, not Rare Element. Second, this Bear Lodge mine just doesn’t seem to get a permit. And given the view of the current administration – which could certainly change given the desire to have locally grown minerals – does not appear to be currently in favor of changing this situation.

The investor’s point of view

I don’t see anything wrong here other than the lack of any obvious avenue to make money for shareholders. But since we shareholders want to make money, I think looking elsewhere is a better bet.