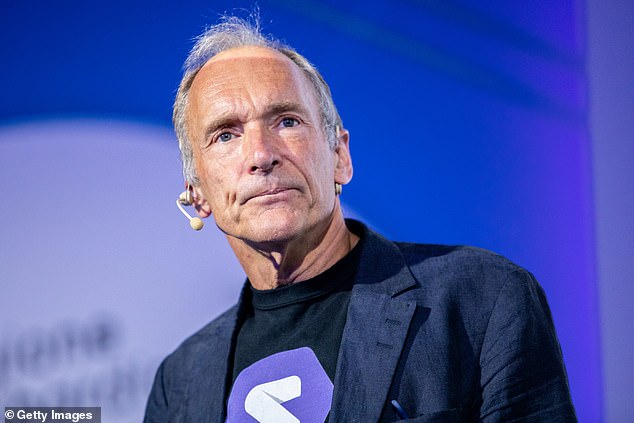 The global Internet standards organization created by the inventor of the World Wide Web, Sir Tim Berners-Lee, is “no longer fit for purpose”, activists said today.

The Movement for an Open Web (MOW) alliance alleged that the World Wide Web Consortium, known as W3C, had been “hijacked by Big Tech, especially Google”.

MOW – a group of tech companies, advertisers and publishers – urged authorities in the US, UK and Europe to assess whether “the processes and procedures in place at W3C favor big technologies and are compatible with antitrust laws â€.

W3C, which was founded in 1994 by computer scientist Sir Tim, who is still a director today, aims to be an independent and impartial body responsible for approving web standards.

But MOW has now complained to the UK Competition and Markets Authority, the European Commission and the US Department of Justice about how W3C works.

MOW said today that W3C has fallen under the control of Google, which has 106 representatives assisting the organization, while most digital companies only have one.

The alliance also attacked the CMA and the Information Commissioner’s Office for allegedly naively assuming that the W3C is genuinely independent and impartial.

Who is Sir Tim Berners-Lee and how did he invent the Internet?

After graduating in 1976, he started as an engineer in the telecommunications and microprocessor software industry.

In 1980, while working as an independent contractor at CERN, he described the concept of a global system based on the use of hypertext to share information between researchers.

It was then that he built a prototype system called the Enquire, which formed the conceptual basis of the World Wide Web.

In 1994, he founded the World Wide Web Consortium (W3C), an international community where web standards are agreed upon. He is still very influential there today.

Sir Tim is also an advocate for internet freedom and open data. In 2009 he founded the World Wide Web Foundation and in 2012 he co-founded the UK Open Data Institute (ODI).

Among his many accolades, he received the title of knight and the order of merit, and was the first recipient of the Millennium Technology Prize of Finland.

He also received the Charles Stark Draper Prize and the Mikhail Gorbachev Prize for “The Man Who Changed the World” and was named one of the 100 Most Important People of the 20th Century by Time magazine.

The MOW said it had made “formal and detailed submissions” to the CMA, DoJ and the EC in which it “charged the W3C with bias, favoring giant tech companies in its procedures and decision-making. and not respecting antitrust laws “.

The organization, which campaigns against Big Tech’s grip on the web, added that it was disappointed that last week the CMA and ICO in separate documents both cited W3C as the right place. for the application of universal standards.

MOW pointed out that Google “has 106 employees who assist W3C in its work, while most other companies only have one.”

He added that an antitrust report from the United States House of Representatives noted that Google representatives outnumbered other members significantly at 106.

This US report also quoted a participant who testified, saying that the W3C “makes it seem like a place where members work together to improve the web platform, but in reality Google’s monopoly position and the The aggressive rate of introduction of new non-standard features frequently reduces to discussing and codifying Google’s functionality and to approving decisions that Google has already made â€.

A spokesperson for MOW said: â€œIn theory, W3C is an open forum where technology companies work together to assess the impact of proposed software and technology changes and agree on actions that need to be taken to ensure unrestricted access and fair competition for all.

“But that was not the case with Google’s new ‘Privacy Sandbox’.”

This was a reference to Google’s intention to replace third-party cookies with a new â€œPrivacy Sandboxâ€.

This means that instead of these traditional cookies, where advertisers can track individuals on the websites they visit, users will be divided into cohorts.

But MOW claims it would restrict open competition on the web by reducing the amount of information other tech, advertising and publishing companies can collect about users.

The MOW said it “is now calling on authorities to investigate whether the processes and procedures in place at W3C favor Big Tech and are compatible with antitrust laws.”

He added: “If they are not compatible, MOW looks for the application of appropriate remedies.”

W3C, an international community where web standards are agreed upon, was founded in 1994

The Alliance Movement for an Open Web alleged that the W3C had been “hijacked by Big Tech, in particular Google”. The tech giant’s Mountain View, Calif., Offices are pictured above

Timothy Cowen, MOW Legal Counsel and Head of Antitrust Law at Preiskel & Co, said: â€œW3C has been captured by Big Tech, even its own antitrust guidelines have not been enforced when they should have been. to be.”

MOW also accused the W3C of adopting “weak processes that allow the main players to pull the ball in their favor.”

He added: “There are precedents for intervention by authorities when such problems arise – for example, the mobile phone standards association, GSMA, has been shown to be biased towards major operators as well, when it has done so. the subject of an investigation by the DoJ in 2019. “

MailOnline has contacted W3C, Google, CMA and ICO for comment.

When Oxford University graduate Sir Tim Berners-Lee submitted his initial proposal for an information management system to colleagues at CERN over 30 years ago, he was unlikely to know the power the web would have and the impact it would have on society. HHere’s a look at the history of the early Web and how it was created:

March 1989: Information Management: A proposal drafted by Tim Berners-Lee and circulated for comment to the European Organization for Nuclear Research, CERN.

October 1990: Sir Tim begins working on a browser and hypertext graphical user interface (GUI) editor using a NeXT Cube computer and the NeXTStep development environment program. He chooses ‘WorldWideWeb’ as the name for the project.

August 1991: The project files are made available on the Internet.

May 1992: Pei Wei, a student computer programmer and member of the computer club eXperimental Computing Facility at the University of California at Berkeley, submits his “Viola” browser for the X test version of the project.

February 1993: The National Center for Supercomputing Applications (NCSA) publishes the first alpha version of “Mosaic for X” by Marc Andreessen, which will become the browser used to popularize the Web, being ported to Microsoft Windows and finally authorized by Microsoft to create its Internet Explorer browser . .

April 1993: CERN declares that the WWW technology would be freely usable by anyone, without any royalty being due to the organization.

May 1994: First international WWW conference at CERN in Geneva.

October 1994: The World Wide Web Consortium (W3C), an international community where web standards are agreed upon, is founded.