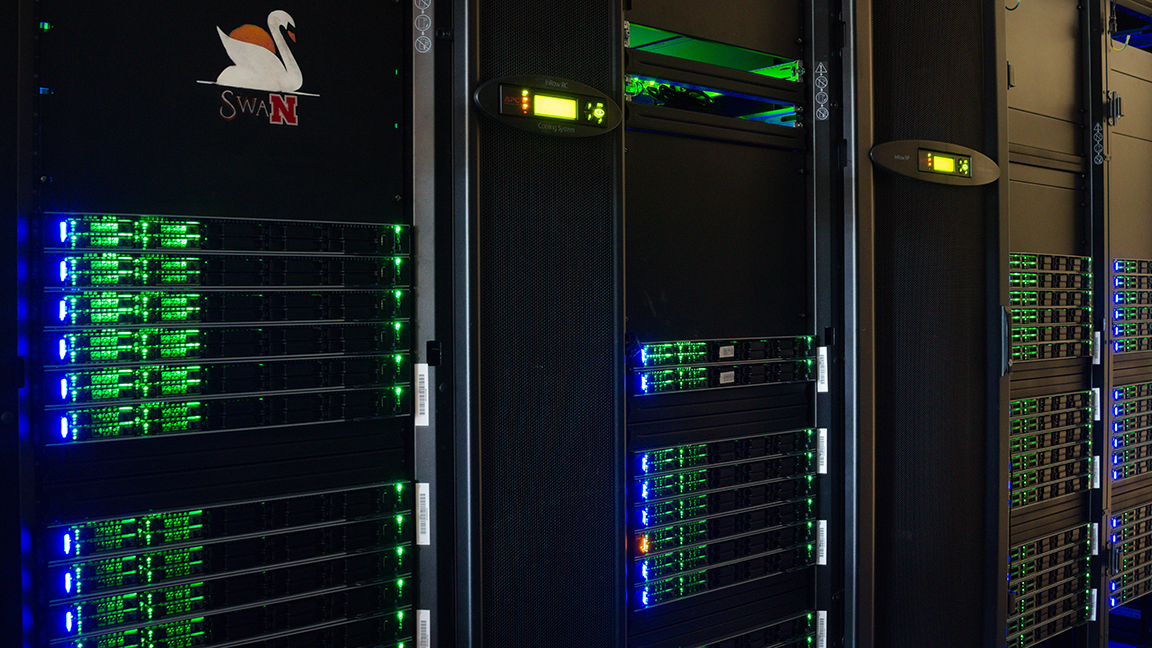 David Swanson’s legacy continues to support student and faculty research through the Holland Computing Center at the University of Nebraska-Lincoln.

In May, the center launched Swan, a new supercomputer providing state-of-the-art resources free of charge to researchers, instructors and students in the University of Nebraska system. The supercomputer is named in honor of Swanson, the founding director of the Holland Computing Center, who was killed in a two-vehicle wreck in rural Minnesota in 2019.

Swan is several times faster than its predecessor, Crane. It includes over 8,000 Intel-based computer cores, an enhanced level of graphics processing capability, and over 5 petabytes (equivalent to 5 million gigabytes) of storage.

“David had a phrase, ‘time to science,’ which he liked to use in our discussions,” said Adam Caprez, applications manager at the Holland Computing Center. “And we hope that Swan will speed up or reduce the time our users wait for results.

“Swan will also push the boundaries of research pursued on our campus, providing the necessary resources that enable cutting-edge areas of study.”

Swan’s funding was provided by the University of Nebraska-Lincoln’s Office of Research and Economic Development and the Nebraska Research Initiative, an initiative of the state of Nebraska to expand research that improves economic growth.

The design and deployment of Swan was supported by the Holland Computing Center systems team (led by Garhan Attebury) and the applications team (led by Caprez). It was also shaped by feedback from University of Nebraska researchers gathered through a variety of channels, including the Office of Research and Economic Development’s research data listening sessions.

“Swan expands Holland Computing Center’s resource offering and will accelerate the rate of discovery for our research partners,” said Hongfeng Yu, the center’s acting director and associate professor of computer science. “And, we welcome use by any Nebraska-based investigator, including all campuses in the A system.”

For more information about Swan and how to access computing resources, visit the Holland Computing Center online or email [email protected]

Go Off: The creator economy will be more important than big tech itself | by Calaxy | June 2022